The objective of the Kosho Ryu Kempo-ka is to be able to relate to everything, abandon his prejudices, and thus rid conflict from his life. Conflict is usually created from differences (the opposite of similarities) of opinion, pertaining to physical or philosophical prejudices. Once you eliminate conflict, emotional or physical, and understand laws and principles, you learn to see yourself as the root of all of your conflict. Once the source of conflict is known, it can be eliminated. Happiness is the result. Kempo-ka become content, able to harmonize with and accept life's events, and able to control their environment. Once you learn to control yourself and your environment, controlling or redirecting an attacker is possible as well. 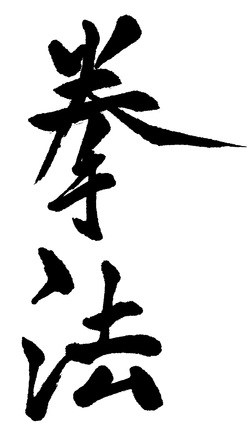 Kempo - Natural Law
Kempo literally translates from Japanese as Fist Law. Its meaning can be traced back to what is called the mudra, which are hand postures. Each of Kempo's hand postures represent both the physical and the spiritual realm. These realms are inexorably linked. Kempo itself is an entity. It is not a style of martial arts or a form of techniques.

Within Kosho Ryu Kempo, there are many sub-arts of study. The purpose of the study of various different art-forms is to learn to see the similarities in all of them. Three general categories of study are the healing arts, the cultural arts, and the martial arts. The study of healing arts reveals a relationship with the martial arts. The martial arts would be looked upon as healing arts from the point of view of a practitioner who wishes to simply study from the martial standpoint. The cultural arts play the same role. Part of the study of cultural arts is the study of history. History must also be studied in the martial and healing arts. Language is also studied from all perspectives. The study of the Japanese language creates the ability in the disciplined student of Kosho Ryu to be able to understand the history and cultures of other people. This in turn ties in with the philosophy of looking for similarities, ridding themselves of prejudice and conflict, and creating happiness and peace in their lives.

Each of the many sub-arts of study in Kosho Ryu eventually intertwine. Aruki waza, for instance, which is a combative technique involving proper posturing toward an opponent in bujutsu, is also utilized in the studies of swordsmanship, shodo (ancient Japanese brush calligraphy), and healing arts. This type of lesson initially brings students to confusion. Eventually, it allows them to understand Mu, nothingness. That is the purpose of the study of Kempo in Kosho Shorei Ryu. Once that is accomplished, one sees everything, and at the same time realizes that it is really nothing.
​
The study of physics is only part of the understanding of Natural Law. Kosho Ryu Kempo-ka also study the natural laws of our basic individual philosophy. In so doing one can understand the physics of both our internal and external structures. Students seek to understand who they are as they relate to others based upon their past experiences and prejudices. Body movement changes much like personalities change, based on an individual's momentary and long-term mind-sets and their physical prejudices. Understanding that both themselves and potential adversaries are governed by these natural laws, Kempo-ka apply a great many strategies to handle potential conflicts successfully. In so doing, it is possible to defeat an opponent without throwing a blow. In fact, it is possible to defeat an opponent by strategically manipulating his ki (mind set in this case), based on an understanding of his prejudices, in such a way as to make him decide to never attack you in the first place! Psychology is physics applied to the mind.
What is Kosho Shorei Ryu?
Kosho literally means old pine tree. Shorei means school of encouragement. A traditional ryu is a school of thought pertaining to an art form. A Japanese Buddhist priest meditated under an old pine tree around 1235 AD and received enlightenment, as he discovered universal laws and natural principles pertaining to our existence and the resolution of conflict. Sei Kosho Shorei Kai International encourages students to move toward this same enlightenment through studying natural law.

Kempo means Fist Law. This is the Kosho Shorei Ryu form of martial arts; but it is more. The predecessors of Kempo are Chuan Fa, in China, and before that Vajra Mukti in India. Kempo's philosophy is to study and understand man's relationship with nature. Kempo is the study of natural law pertaining to mankind. Kempo does not just deal with the physical arts; it also deals with the spiritual side of oneself, and mankind's understanding of itself.

Traditionally, Kempo students have studied much more than only the martial arts. They also study philosophical classics, including the I Ching, the Book of Changes. They study the five elements and the In and Yo (Yin and Yang in Chinese). They understand the principle of balance, and how one can, through understanding balance, exist harmoniously with the whole of mankind. Within their own realm, in their own reality, they learn how to adjust their reality, behavior, or physical presence within others' perception of reality. Primarily, they study themselves. Body, mind, and spirit. This microcosm leads to the understanding of all things.

Kempo, then, means study, and practice, and the discipline of study and practice. The understanding of this philosophy, the embodiment of this practice, and the reality of this study prepares the Kempo-ka well for a possible conflict. Defending one's self becomes very easy. Kosho is a way of life and an understanding of the process of life. Understanding the process of a fight is the key. Techniques used in a fight are only a small part of that process. What happens before that point is of primary importance.

The study, and practice of this study and practice, has been used successfully throughout history by Kosho Ryu warrior-monks and other practitioners. In the late 1500s, Shaka-In, the temple grounds on which the now-famous old pine tree still stands, was attacked by 5000 samurai. Using Kosho Shorei Ryu Kempo, the 400 monks living and training there engaged in combat against the onslaught, successfully protecting some of the most important artifacts and property of the temple grounds, including the famous old pine tree itself.

The martial prowess of the Kosho Shorei monks was well-known among the Japanese at the time, and was feared by many Daimyo as well as their swordsmen. It is the practice of this philosophy of study which gave the monks their edge. This philosophy was adopted by many of Japan's greatest and most famous swordsmen, including Musashi Miyamoto.

The success of Kosho Ryu today is apparent in the large numbers of students and teachers gravitating to these studies. Many teachers with decades of experience are re-examining their training based on the uniqueness and startling pertinence of what they see in a Kosho Ryu seminar. Many of these teachers and students have said that the combat-effectiveness of Kosho is simply at a higher level than what they had seen previously. Kosho Ryu concepts had often never even been considered by many in their previous training.

Although it has been taught by some that Kempo was improved in Hawaii to accommodate the large American street brawler, this is absurd. Principles of training capable of preparing 400 monks to wage battle against 5000 samurai need not be improved to be appropriate for a bar fight! Those who felt they improved Kempo obviously did not understand what they were taught in the first place. The philosophical teachings, which were largely ignored by many of Mitose Sensei's early students with the notable exception of the late Thomas Young, play a major role in the manifestation of the physical combative arts of Kosho Ryu. Without them, True understanding of Kempo is not possible. Kempo is not a martial art. It is much more.

The Kosho Ryu practitioner studies natural law. In so doing, he has the ability to see similarities in all movement. Therefore he holds no prejudice toward other styles or martial systems. Kosho Ryu practitioners understand that the only real differences between martial arts pertain to the cultures from which they come. Cultures produce various tendencies which shape the way arts are taught. Although teaching methods are delivery modes for the understanding of the essence of an art, the arts themselves are very similar. Bruce Juchnik Hanshi is well-qualified to make a statement such as this. He holds mastery-level knowledge and certification in over ten distinct martial art-forms.

Kosho Shorei Ryu Kempo originated in Japan. To practitioners, Kosho Ryu's Chinese roots are apparent in its basic philosophy. Because Kosho teaches them to look for similarities, they see no substantial difference between Kosho and studies from Korea, Indonesia, China, or America. All human beings move basically the same way. All motion is related. The same emotions are experienced by all of mankind. Fundamentally, human beings are similar, throughout continents, cultures, and time.